Attic Inhabitant with BEN
It's an indie rock show, but not one that's real dedicated to the concept of 'rock', and gets kind of flexible about the 'indie'. A few of your old faves, some of the new stuff you've been meaning to check out, and some cross-pollination from other genres near and far. Airs every other week.
(12:00 AM - 01:00 AM ET)

Blues Zeppelin
Hosted by former Ithacan, Mark Stenzler, the Blues Zeppelin features an eclectic mix of blues music with a global perspective. A former radio pirate (Radio Free Ithaca) in 1980-1981, Mark has been piloting the Blues Zeppelin on Swiss Community Radio since 1989.
(03:00 AM - 05:00 AM ET)

Planetary Radio
Each week, Planetary Radio visits with a scientist, engineer, project manager, astronaut, advocate or writer who provides a unique and exciting perspective on the exploration of our solar system and beyond. We also showcase regular features that raise your space IQ while they put a smile on your face. Host Mat Kaplan is joined by Planetary Society colleagues Bill Nye the Science Guy, Bruce Betts, and Emily Lakdawalla.
(05:00 AM - 05:30 AM ET)

We Do The Work
A local worker radio program produced by KSVR 91.7 FM Skagit Valley Community radio. Weekly features include News, Interviews, Music, and Comments. We Do The Work believes American Workers are at the heart of our Economy and Culture and deserve dignity, respect, and a decent family wage. WE DO THE WORK is dedicated to the well-being of all workers, union and non-union alike. The program believes that everyone who toils for wages or salaries, or who would if they could find a job, deserves to ...
(06:00 AM - 06:30 AM ET)

Sprouts with -
Sprouts is a half-hour weekly program featuring radio content being produced by grassroots community radio stations, Indy Media Centers, and other independent production groups. We celebrate these many vital and diverse voices by bringing them to a national audience. Our mission is to bring new voices to the airwaves, increase communication between this larger community of media producers of conscience, and encourage production collaboration across geographical distances via the Internet. We ...
(06:30 AM - 07:00 AM ET)

First Voices Radio
First Voices Radio (formerly First Voices Indigenous Radio) is the first Indigenous radio program in the northeastern U.S. The program has become known for bringing to the airwaves the experiences, perspectives and struggles of Indigenous peoples worldwide whose exclusion from mainstream, progressive and alternative media is deleterious to the whole of humanity. The program’s Host, Executive Producer and Founder Tiokasin Ghosthorse is from the Cheyenne River Lakota Nation in South Dakota ...
(07:00 AM - 08:00 AM ET)

Onstage / Offstage with GEORGE SAPIO
All theatre, all the time. Interviews with everyone from actors to directors, tech gods, to writers. In-depth journeys into what makes theatre work.
(04:30 PM - 05:00 PM ET) 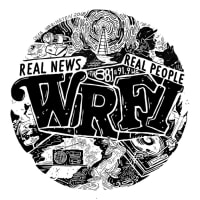 An Ithaca nursing home has become one of the first in the state to reach 100 percent vaccination of both residents and workers. According to WSYR the Kendal at Ithaca facility is one of just 13 nursing homes to reach the mark in New York State. The facility houses 340 residents over the age of The post Kendal at Ithaca Reaches 100% Vaccination appeared first on WRFI Community Radio. ... more

Not all healthcare workers in New York State are required to have a Covid-19 vaccination.

Tompkins County Health Department has released new guidance for third and booster doses of the Pfizer COVID vaccine. A booster dose is recommended for certain adults who received the second of two doses of the vaccine at least 6 months ago including those: 65 or older, living in a long-term care facility, or those 50-64 The post Tompkins Health Department Releases Guidance for COVID Booster Shots ... more

Tune in at 3pm on September 11, 18, and 25 for a three-part radio play produced for WRFI by the Civic Ensemble and College Initiative Upstate. Join the in-person listening party and talkback at the Cherry ArtSpace at 3pm on September 25. (Masks are required for all guests, regardless of vaccination status.) Based on the The post Steppin' Into My Shoes” Radio Play with the Civic Ensemble R ... more

(Dominick Recckio / Tompkins County) TOMPKINS COUNTY, NY — There are 428 active cases of COVID-19 in Tompkins County, burying the previous all time high of 330 active cases on January 8th, 2021. On August 26th,  there were just 186 active cases. There have been an average of 60 new cases every day for the The post Active COVID Cases Reach New Heights, Hospitalizations Remain Low appeared first on ... more